All this talk in the media about the iPad – and there’s plenty of it, with an estimated 80% of the articles in my RSS feeds over the last few days being iPad related in one way or another – has whet my appetite for a slate-style device, but one that offers a little more flexibility than Apple’s locked-down PoS.

The first thing to catch my eye was the WePad from German manufacturer Neofonie.  The specifications call out to me – 11.6″ 1366×768 display, SDHC card support, USB ports, Android operating system, and a 1.66GHz Atom processor all pretty much crap on the iPad from a very great height, with the sole exception being the mere 6 hour battery life to the iPad’s 10 – and it looks shiny enough, but sadly it’s not yet available to buy.

Okay, so Android – if not rooted – is still a locked-down platform, but compared to the iPhone OS – as found on the iPod Touch, the iPhone (obviously) and the iPad – it’s as free as a kilt and no knickers.  Neofonie has even promised that, despite the fact they’re aiming the WePad as a platform for its WeMagazine digital publishing platform, full access to the Android Market will be granted – meaning third-party applications can be installed without restriction.

I’m still undecided as to the relative merits of the slate form factor, but the WePad has certainly got my attention – and not just because it sounds like a euphemism for Tena Lady. 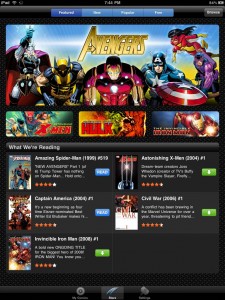 I’ve been scoffing at the iPad since its details were first announced: no Flash support; no multitasking; no third-party unapproved apps; why would I ever want one?

Well, I think I’ve just found the answer in the Marvel Comics app.  Quite frankly, it looks awesome.

The guys over at Boing Boing have got the details, and the included video makes it look like the sort of thing with which I, quite frankly, need to be involved.

I’ve been reading comics – well, mostly manga – on my Sony PRS-505 for a while, converting them to PDF and futzing with the images to better suit the 8-colour greyscale eInk screen, and it’s got me hooked on digital comics.  While that single app certainly wouldn’t make me rush out and buy an iPad – hell, $500 gets you a hell of a lot of paper comics – it’s definitely making me more interested, and I’ll be keeping an eye out for the inevitable Android- and Ubuntu-based slates as they get released.

Well, that or I’ll finally get around to converting my old Eee PC into a touch-screen enabled tablet…